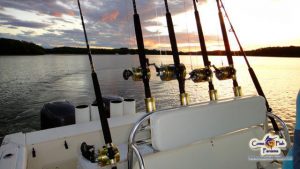 Fishing with us this week were returning husband and wife anglers Junior and Nitzia as well as first-time Come Fish Panama anglers Rene, Eric and Veru. On our way offshore, we were rewarded with a magnificent Pacific Ocean sunrise and calm 1-2 foot swells. Wind and sea conditions remained calm throughout the day. It feels as though Panama’s summer season is just around the corner so to speak, when we typically enjoy fabulous fishing and calm conditions.

Spotting the Dolphins – Looking for Tuna

Once we spotted the porpoises, we eased the boat near the school thinking and hoping that the Yellowfin would be lurking just below or alongside them. We threw out a live Blue Runner to see if the bite was on, and nothing. We caught up to the school once again, moved in front of them, and tossed out the Blue Runner once again. Nothing! Trying to make something happen for this group, we decided to drop a few jigs down deep to see if the Tuna were holding deeper, but that didn’t trigger a bite either. On to the bottom feeders for some action! 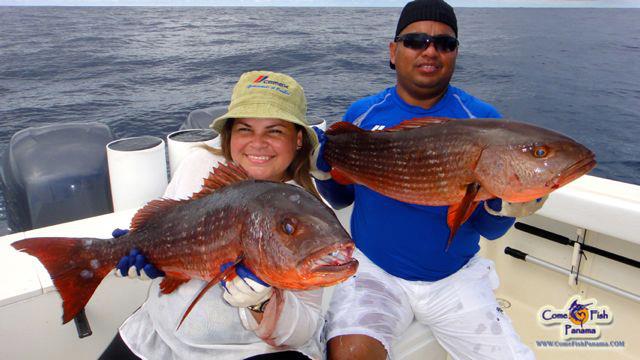 Veru and Eric on Snapper

I have to say that this group including Rene, Eric, and Junior were dialed in with the snapper bite. They hooked up with dead bait, live bait, jigs and even by throwing a Wombat popper made by OTI just before moving on to other species. Veru and Nitzia also got in on the action and ended up catching a beautiful Mullet Snapper on live bait. By the end of the bite at “Snapper Lane”, this group of anglers hooked up and released over 25 Mullet Snapper, Cubera Snapper and Rock Snapper. We decided to move to a spot where we usually find Amberjack holding, but today must have been their day off. So, no AJs for this Snapper group, but certainly some sore arms from the previous battle.

After getting a good work out on the Snappers, these guys and gals wanted to change the action, so we trolled a 5 lure spread for Dorado just off Snapper Lane. It wasn’t long before Nitzia was on a leaping Dorado. After a few jumps, the beautiful Dorado was boated and in the box along with several others. After all, it is Dorado season in the Gulf of Chiriquí so we were expecting a decent bite. In fact, all 5 anglers hooked up with 2 or 3 Dorados each with only a couple getting off to fight another day. The Dorado action is red hot off the coast of Chiriquí, Panama where it isn’t unusual to be hooked up within 5 to 10 minutes of setting out your pattern. This group was really excited to get in on all the action this week even though they didn’t get a tuna bite. Apparently, the other species would generate enough fish stories until their next trip.

We would like to thank everyone in this group for selecting Come Fish Panama over the other offshore sport fishing charters in the area. We enjoyed their company and friendship and look forward to having them during our Yellowfin Tuna Run in 2013. To view the non-stop action fishing photos, please visit our photo line-up at

Veru and Eric on Snapper

Catch of the day!!